Broadside Illustrations: This page has two sections: a short introduction to broadside woodcuts and an analysis of the woodcuts used in Marlowe’s ballad.

Woodcuts were recycled and very few were made specifically for a ballad. A great deal of time and work was invested in the creation of new woodcuts. The wood used was often expensive and needed to be imported: “Some popular wood choices included nut wood, lime wood, pear wood, and other nut and fruit woods like cherry, beech, maple and apple.”2 Unlike engravings, which had subtle details and featured shades of gray, and etchings, which used freer techniques and more regular, even, and wiry lines, Woodcuts generally had bolder lines that were more suitable for larger images and were often, beginning in the sixteenth century, glued together to produce prints of extraordinary size.3 The majority of the woodcuts served no other purpose than to represent popular or common images. It was not until later, in the Jacobean era, that woodcuts included more sophisticated images, and began to be specially created to be associated with the subjects of the ballad texts.4 Printers like Thomas Symcock would reuse woodcuts for a number of other printings. Next, when we start to look at the woodcuts used for the Marlowe ballad, we should consider how much effort went into the creation of those, and similar, woodcuts.

The two woodcuts placed together cue the reader into the main narrative of the ballad: in this case, a dialogue between a man and a woman. The woodcuts used in the Marlowe ballad follow a common theme, representing the kind of scene the ballad creates, a scene of courtly love in a pastoral setting. This is demonstrated by the images of the flowers and grass at the feet of the figures. The first woodcut (Figure 1), representing the voice of the man, is a typical representation of a nobleman or courtier, while the second woodcut (Figure 2), representing the voice of a  woman, is a typical representation of a noblewoman. The woman is represented in the moment of wooing as she holds a flower in her hand. Both figures are outside, creating the atmosphere of sensual courtly love amid spring-time. In terms of dress, the man wears a Caroline suit, while the woman is in a late Elizabethan/Jacobean-style dress.7 The clothing also tells the reader that these figures, and the dialogue between them, is meant to represent sophisticated individuals—those who can afford such styles of the court—and not the common man or woman. These styles of fashion are important in that they give us sense of when these woodcuts were made; these woodcuts were not made at the same time and they were, therefore, not made specifically for this broadside. 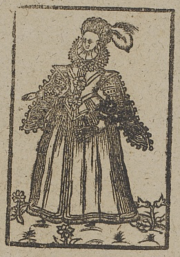 To get an idea of similar woodcuts, the woodcuts represented above (scroll over or click on the image to see its caption) are from two different ballads: the first printed around 1628 (Pepys collection) and the second printed sometime between 1601-1640 (Roxburghe collection). Both deal with the themes of love and courtship, as with the Marlowe ballad. In the Roxburghe ballad woodcut (Figure 3 and 4), the man and woman are facing each other and are both in an outside, spring setting, as in the Marlowe woodcuts. The man’s hand is stretched out towards the woman as her hand is stretched out toward his. In the Marlowe woodcuts (Figures 1 and 2), only the woman has her hand stretched out (although she is holding a flower, a representation of the possibilities of blossoming love); the man has his hands on his hips, anticipating the the woman’s reply. Similarly, the Pepys woodcut (Figures 5 and 6) features a man and woman in the same position. The dress displayed in the woodcuts of the Roxburghe ballad are clearly Elizabethan, while the Pepys ballad woodcuts show a mix of Caroline (Figure 5) and Elizabethan (Figure 6).

However, what you see is not always what you get. These kinds of woodcuts were reused for a variety of ballads that included a dialogue between a man and a woman. Some ballads did not speak of wooing as Marlowe’s does, but instead focus on a more vulgar humor and sex.12 Some of the individual woodcuts were also to be used for ballads that had nothing to do with wooing, like Figure 3 which is used a ballad “Roome for Companie, here comes Good Fellowes,”13 which was about men drinking, and Figure 5 which is used in “Seldom cleanly,”14 a ballad about housewifery, or housekeeping.

The woodcuts used for Marlowe’s ballad (Figures 1 and 2) were used by the same printer, Thomas Symcock, for many different kinds of ballads. One, in particular, “A merry Dialogue betwixt a married man and his wife,” includes the lyrics “women they must rule their tongues/that bring them to so many wrongs.”15 This is very different from the feelings of the Marlowe lyrics. It is the relation between the two woodcuts and how they interact with each other that allows them to create the image of the ballad they are representing.

←RETURN TO THE TUNE | GO TO RESPONSES→